Email This Mývatn is a shallow eutrophic lake situated in an area of active volcanism in the north of Iceland.

Mývatn is a shallow eutrophic lake situated in an area of active volcanism in the north of Iceland, not far from Krafla volcano.

The lake and its surrounding wetlands have an exceptionally rich fauna of waterbirds, especially ducks.

The lake was created by a large basaltic lava eruption 2300 years ago, and the surrounding landscape is dominated by volcanic landforms, including lava pillars and rootless vents (pseudocraters).

The effluent river Laxá is known for its rich fishing for Brown Trout and Atlantic Salmon. 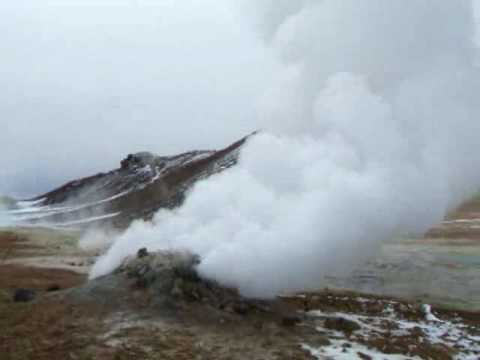 The name of the lake (Icelandic mý ("midge") and vatn ("lake"); the lake of midges) comes from the huge numbers of flies (midges) to be found there in the summer.

The name Mývatn is sometimes used not only for the lake but the whole surrounding inhabited area. The River Laxá, Lake Mývatn and the surrounding wetlands are protected as a nature reserve (The Mývatn-Laxá Nature Conservation Area).

Since the year 2000, a marathon around the lake takes place in summer.

The lake is fed by nutrient-rich springwater and has a high abundance of aquatic insects (Chironomidae) and Cladocera that form an attractive food supply for ducks. Thirteen species of ducks nest here. The duck species composition is unique in the mixture of Eurasian and North American elements and of boreal and arctic species. Most of the ducks are migratory, arriving in late April - early May from north-western Europe. The most abundant is the Tufted Duck, which immigrated to Iceland at the end of the 19th century. The Greater Scaup is the second most common duck species.

Other common species include the Barrow's Goldeneye, Red-breasted Merganser, Wigeon, Gadwall, Mallard, Common Scoter, Long-tailed duck and Teal. The outflowing Laxá river has a dense colony of Harlequin Ducks and there is a large colony of Eiders at the river mouth some 50 km away from Lake Mývatn.

The Barrow's Goldeneye is special in being the only nearctic duck in the area (and Iceland as a whole). Its population of about 2000 birds relies entirely on the habitat provided by the Mývatn-Laxá water system and its surrounding lava fields. Most of the Barrow's Goldeneyes overwinter there, using ice-free areas kept open by emerging spring water (both warm and cold) and in the strong river current.

This species is a hole-nester, in North America using tree-holes, but at Mývatn the birds use cavities in the lava for nesting. The other duck species nest abundantly in the numerous islands of the lake and the surrounding marshlands. There is a long tradition of harvesting duck eggs for home use on the local farms. To ensure sustainability, the harvesting follows strict age-old rules of leaving at least four eggs in a nest for the duck to incubate.

The waterbird situation has been monitored annually since 1975 by the Mývatn Research Station.